The park has grown into a world – but bigger doesn’t always mean better. 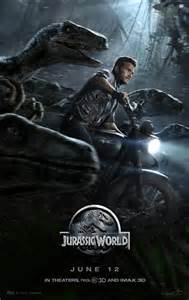 It’s been twenty-two years since Jurassic Park came out. (At this point I’ll pause for a second to let that sink in/ get over the shock/let you sit down if you are standing!) Few blockbusters have the same amount of loyalty or produce the same levels of nostalgia from its fans or have so many iconic moments. From that music, to the shot of the water vibrating in a glass building to the introduction of the T-Rex, the raptors in the kitchen and the wonder that is Jeff Goldblum. As a consequence the makers of Jurassic World had a difficult task – to pay homage to the origins whilst also developing without being accused of trying to reinvent the wheel. In some ways they are successful, aspects of this film are incredibly entertaining and equal the original. On the other hand, some aspects are jumbled, flawed and disappointing.

The film reflects real-time, set 22 years after Jurassic Park was forced to close. Jurassic World is one of the world’s most popular theme parks – just as one would take their family to Disneyland they live in a world where it’s normal to go somewhere to see dinosaurs. In fact, it has become so normal that operations manger Claire Dearing (Bryce Dallas Howard) has been put in charge by the park owner to oversee the upcoming new exhibit. It’s a breed of dinosaur that has never been seen before – literally as it didn’t exist before. The ‘Indominous Rex’ is a product of genetic modification – a hybrid of different species. Although her nephews are currently spending a week at the Jurassic World – who arrived with the intent of spending time with her – she has been unable to do because of this indomitable project. Her nephews go off exploring the theme park with her assistant for company, whilst Claire deals with issues regards the new beast. She is forced to turn to Owen Grady (Chris Pratt, playing an oh-so-common ex-military/ leading velociraptor expert and trainer) for help. If you haven’t guess what happens next (SPOILER ALERT) it escapes. How will Claire and Owen prevent the treat of a beast that has never existed before? A breed whose genetic origins are being withheld from them? What will happen to Claire’s nephews? Will Owen and Claire have an inevitable romance? Will these film avoid obvious character types?

I’ll only provide an answer to the last of those questions – no. Whilst no-one would turn to Jurassic World or it’s predecessors looking for realism, it would be nice to have an action-adventure movie in which the events do not overshadow the characters. In fact, can you imagine a world where a 3D movie action-adventure has 3D characters? Jurassic World is not that kind of world. The dinosaurs are given more developed characters than the humans. In Jurassic World we have:

– Owen Grady, the bad-ass bloke who has no time for society’s bullshit or human being’s bullshit. He wants to live in peace and hang out with his raptor buds alpha-style. He is an attractive man, and knows it. He uses humour to defuse awkward situations or to make his point. (Think Indiana Jones, with less charm.)

– Claire Dearing, the work-obsessive who cares more about her work than family. She is deemed cold and calculating when compared to the male hero. All she cares about is money, order and routine. Luckily the events of the film will show her that this is wrong, and will fix her evil corporate ways. She is living proof that it is impossible to be successful and also care about other people. Runs around in heels. (Think every stereotype of working women that exists in film)

– Zach Mitchell, the older of Claire’s nephews, thinks he is a ladies-man. Stares at lots of young women because he is a ladies man. Turns out that this is all a front to hide his caring-side, and he actually does love his little brother.

– Gray Mitchell, Zach’s younger brother. Shown to have obsessive tendencies through his encyclopaedic knowledge of dinosaurs.

– Vic Hoskins, a man who wants to use Owen’s raptors for evil. Does evil-ish things.

Without any interesting heroes to really root for, the film falls slightly flat, and we end up feeling more sympathy for the dinosaurs. Yes, there are some fantastic set-pieces – some sequences are genuinely frightening and rival the original film. Yes, there are some lovely and subtle tributes to the original film. Yes, it is rather entertaining and somewhat worthy of awe. But it is a film which seems so uncertain of itself with some cheesiness worthy of Skarknado. It simultaneously pokes fun at action movie tropes but then utilises others, with a side order of predictability. All of this results in a vanilla-bland popcorn movie.