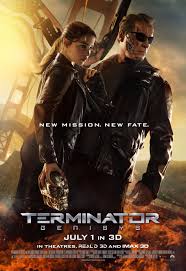 At the start of the year, should you have browsed a cinema listing of upcoming releases, you may have found yourself feeling confused as to what year it was. With Hollywood continuing to indicate a depletion of original ideas by reinventing its back catalogue it is easy to become cynical at these ‘new’ releases. In the past few weeks alone we’ve had Mad Max and Jurassic Park to name but two. And now, 31 years after Arnie first graced our screens as the Austrian-accented cyborg assassin, he is back; as he promised Sarah Connor all those years ago.

Before commencing this review, I do need to acknowledge the amount of bad reviews that have already come out about this film. I will state quite clearly this is not a good film (Sam, if you’re reading this, deal with it!) However, I do not think it deserves the savagery that has been aimed at it. Upon viewing this film one could argue that it has become a target of film – with so much vanilla being shown in cinemas at the moment and the first two Terminator films being so iconic, it is easy and fun to pull this film to shreds. But is it so necessary? In fact, arguably, the ‘issues’ being identified with Genysis are many action movies – overreliance on clichés, dodgy script and pacing, set-pieces as opposed to a story arc, gratuitous nudity and more miss-than-hit jokes. Cinematic blasphemy aside, surely most of the venom in these reviews stems from the fact the original films hold such status and the loyal fans have been wounded enough by mediocre sequels? Agreed, watching this film is a bit like watching a cover band plays the hits of your favourite artist and it is a rather unmemorable movie – but it’s not an awful one.

Plot-wise we have a modern rehash of what has gone before. John Connor (Jason Clarke) sends Kyle Reece (Jai Courtney) back in time to help protect his mother Sarah (Emila Clarke) and, unbeknownst to Kyle, partake in John’s conception. However, when Kyle arrives back in the 1980s he arrives in a world that is strange both to us and Kyle; for Sarah is not the damsel-in-distress Kyle had been expecting to meet and defend. Instead she is, supposedly, an ass-kicking battle maiden. How has this happened? Because of her father figure Pops – previously known as the T-800 (Arnold Schwarzenegger) who has trained her, protected her and reminded her of her pre-designed fate since the age of nine. It’s an interesting idea and in its application it’s given a good effort, but in reality It does play out like fan fiction. It’s as if the script writer’s said, ‘Well we have pissed off the fans a lot with two crappy sequels, so let’s trawl the web and see what they want to see and we’ll just shove that into the script!’ Arnie’s T-800 was the original films USP and by pushing the reset button the audience will be split in two. You opinion on this aspect will be defined by your response to hearing Kyle Reece say of T-800, ‘He Loved you.’ Yep. He now comes with feelings. Perhaps not an upgrade all fans would want.

This decision to adapt his characterisation is clearly an attempt to put a new stamp on things, and a hug-able T-800 is not the only alteration. By the end of the film the timeline has been completely changed, with a new mythos and ideology. In fact, considering the entire film appears to be a fable warning against the perils of technology and internet safety, you’d be forgiven for forgetting that this a Terminator movie at all. For Sarah, Kyle and Pops (he is only referred to T-800 once compared to the countless times he is called Pops) must yet again stop Judgement Day – but judgement day is in brand new packaging here. Society knows a big event is coming; they even have a countdown for it, except they don’t know what the countdown is for. They believe that when the clock gets to zero computer software Genysis will be activated, software that will allow them to become fully connected – all their technology joined together. Instead it is when Genysis, an AI descendent of Hal from 2001: Space Odyssey in the form of Matt Smith (of Doctor Who fame), will assert his control of humanity and destroy it.

Our trio’s journey to stop this will obviously not be smooth, and there are many entertaining set pieces along the way with the special effects that are superb and often tension-inducing. However, as a whole the plot is a bit of a slog and the repetitiveness of the set pieces soon becomes rather tedious. The performances of the actors are rather stilted and wooden. If this film had not tried to induct itself into the Terminator franchise it would be regarded as an entertaining Friday night spectacle. Instead, by trying to reinvent things, they have lost and even angered the original fans by creating a pale imitation of a franchise.  For those who are not big fans of those films I’d recommend this movie if you want some easy entertainment. For the die-hard fans out there avoid it – you’ll spend the film disappointed and haunted by the ghosts of movies past.