Aged nineteen a small town girl, living in a lonely world, ran away with a substitute English teacher. Her parents had tried to persuade her that it was an awful idea. They had begged her to stay. On that afternoon, before she fled, something ‘awful’ happened during that confrontation, which led to the relationship between her and her parents being severed. The girl and her now-husband had a baby girl shortly after, followed two years later by a baby boy. Ten years later the substitute English teacher ran away with another woman, leaving behind his wife and two young children. A difficult five years followed, with the three still struggling to come to terms with the abandonment. That’s when a message arrives from her parents, who found them online. They acknowledge that it may be difficult to re-establish their relationship with their daughter, but would love to start one with their grandchildren. The grandchildren agree and beg to visit their grandparents. The mother reluctantly agrees, sending them off to her old hometown, whilst she herself goes on holiday with her new partner.

The grandchildren make their own way there by train, and are met at the station by their anxiously waiting grandparents who are holding a banner decorated with welcomes. They drive back to the family home, and a mutual fondness is formed. The grandparents dot on the grandchildren and their quirks, and the grandchildren are bemused by these old folks whose bedtime is 9:30pm. At 10.15pm the granddaughter leaves her bedroom to be greeted by her grandmother pacing the downstairs in a trance and projectile vomiting. The next day this is explained away by a tummy bug.

For the rest of their week-long stay the grandchildren realise that there is more than just character quirks going on here, something is seriously wrong. What makes them think this? The grandfather stores hundreds of used adult diapers in the shed. The grandmother runs around the house naked at night scraping the walls and crawling around the floor. She sits in a rocking chair cackling to herself whilst staring at the wall. She chases them underneath the house. She has a breakdown whilst discussing ‘that afternoon’ and also spends one night waiting outside the grandchildren’s room holding a knife.

When having a conversation via Skype with their mother they hold the camera towards the grandparents and the plot twist is revealed – those are not actually their grandparents. The mother tells them to try to escape and that she is on their way. The grandchildren are trapped into playing a game of trivial pursuit, during the course of which all is revealed. For when the granddaughter escapes into the basement she find the bodies of an elderly couple – a framed photograph beside them reveals that they were her grandparents. The imposters are escaped mental patients, who wanted to pretend to have a family just for a week. They were jealous of the actual grandparents, who were volunteer therapists. In fact, the fake-grandmother had actually drowned both of her own children.

Two confrontations happen, with fake-grandfather rubbing a used diaper in the face of the grandson and the fake-grandmother chasing the granddaughter around a locked bedroom. The granddaughter kills the fake-grandmother with shards of a broken mirror. The grandson, with the aid of his sister, kills the fake-grandfather by slamming his head in the fridge doors multiple times. The mother then arrives and takes them to safety; the final scene has the mother revealing the ‘awful’ events of that afternoon fifteen years ago. She had slapped her mother and her father had slapped her in return. Fade to black.

There are so many issues with this film it is hard to start. So instead of a normal review, which would instead become an incomprehensible and lengthy rant, I will instead use bullet points to divide these issues into sections.

The Visit is only roughly ninety minutes long, but it feels like so much more. It’s bloated with ridiculousness, flawed ideas and frustrating characters. 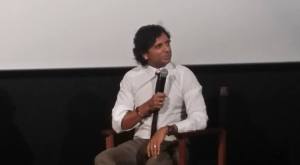