“This is what I do. I’m an undercover narcotics agent, I sit with murderers and made men and I lie. I lie my ass off.”

What impressed me most about ‘The Infiltrator’ is how it manages to make a film about narcotics, murderers and lying so bloomin’ boring. The film possesses little of the adrenaline and danger it spends so long talking about because it is so busy spending time talking instead of actually doing. So much so, and being perfectly honest here, I went for a loo-break halfway through, and lingered about outside the screen before going back in as I was so desperate for time to pass. I then found the remainder of the film an endurance test. I’m baffled as to the amount of positive reviews about this film as it is nowhere near as good as it should/could be. Films focusing on the ‘war on drugs’ belong to an oversaturated market and this film is nowhere near as powerful as last year’s ‘Sicario‘ (click here for my review). Imagine a sterling cast bogged down by a story heavy on exposition and derailed by obvious plotting. Here’s the result.

Cranston is fine as the U.S. Customs Service special agent Bob Mazur. Fresh off his latest bust, with a background in accountancy not high-risk takedowns, he finds himself infiltrating a cash-for-coke pipeline that leads all the way up to late Colombian kingpin Pablo Escobar.In fact Cranston is more than fine as he desperately tries to make this film work and give it some much-needed life. It’s a valiant if unsuccessful effort. Frustratingly the film has moments where it shows signs of life (there’s an initiation involving guns and voodoo that is superbly gripping) when all the elements come together, before being sapped of energy once more. The story the film tells is a true one, as confirmed by the end credits revealing what happened next. I couldn’t help but think a documentary of what had happened would have been far more engaging – reinforcing that old adage that sometimes truth is far stranger than fiction. 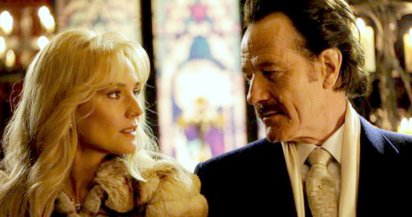 His partner, played by Leguizamo, gets some of the best gags and moments – proving yet again that he is one of Hollywood’s most reliable supporting cast actors. Joseph Gilgun is another standout with a solid chunk of screentime proving, were it needed, that he is one of the UK’s most deserving talents. A nod has to go to (say Hello to!) Jason Isaacs for his all-short cameo.

All in all ‘The Infiltrator’ provides a great cast delivering good dialogue yet within a story that is ultimately lacking in tension. The plotting is scatty, entering into weird territory, as it hops between scenes and moments – spending far too much time on some and not enough on others.  The film tries to convey the tension that arises from pretending to form friendships with those you’re trying to bust, yet manages to actually say very little about it. Like the film as a whole it should be powerful yet poor plotting and pacing get in the way.

The Infiltrator opened in UK cinemas on September 16th.