“Once upon a time, there was a woman. The most beautiful and amazing woman in the world. One day, she was attacked by a monster but then a girl cam running up and killed it. And the woman said, you are my special girl and I’ll never let you go.”

‘The Girl With All The Gifts’ is undoubtedly the best British horror movie in years. I want to say it’s also the best zombie horror since ‘28 Days Later‘ – but I think it might be the only one since..? TGWATG shares much with ‘28 Days Later‘. It shows the aftermath of the crisis, deals primarily with the minute details of functioning in this brave new world and has a bleak tone of stoic acceptance that only British cinema can truly capture. What truly unites both movies is that they have a heart that drives the gripping narrative whilst littered with moments that will scare you silly – few stories are this well written.

Melanie (Nanua) is one of a small group of children who live and attend school at an army base camp in rural England. The outside world is overrun by ‘Hungries’ – humans that have been contaminated with a fungal disease that takes away their freewill and makes them hungry for flesh. The children at the base camp are special as they are second generation ‘Hungries’ – unlike the first generation they can think and feel. But Melanie stands out amongst the group – her teacher Ms. Justineau knows she is special. So do Sgt. Eddie Parks (Considine) and Dr Caldwell (Close). When the army base in compromised they must embark together on a journey of survival. 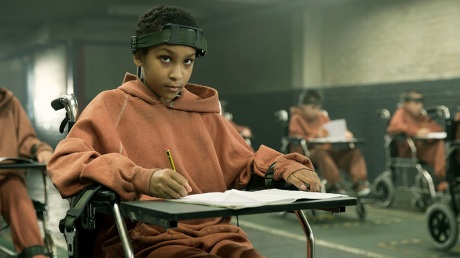 This gripping atmosphere is enhanced to near-perfection by the performances of the cast; many of whom are some of the UK’s little acknowledged true talents. Arterton (who was wonderful and underappreciated in last year’s Gemma Bovery – click here for my review) provides us with a character that is moving and heartfelt, an everywoman in a brutal world. Considine brings the right balance between gruff and heart – he truly feels like a man who has been forced to become someone else by horrific circumstances. Akinade (if you’ve not seen the two  fantastic Channel 4’s series ‘Banana’ & its companion ‘Cucumber‘ you need to do so now!) makes a character who does the ‘don’t do it!’ moments with believability and likeability. Glenn Close provides yet another understated yet extraordinary performance. 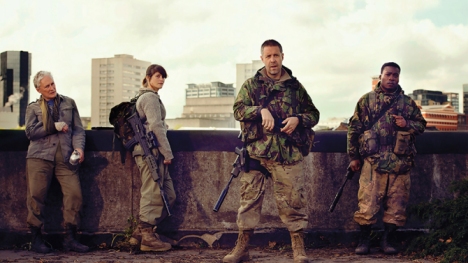 But tt’s the now 13-year-old Nanua who deserves the most recognition for her work here. In a year filled with wonderful performances (just this month we’ve had ‘Little Men‘ and ‘Captain Fantastic‘ – both films were made so brilliant by their young actors) this is a standout performance. She gives everything to the role and provides us with a truly compelling character. Throughout her story arc we reflect on her character’s depths and capability in a way that is only possible due to the skill of her performance. Unlike many zombie films we cannot help but wonder if the zombies are a threat or the future.

It starts bleak and gets bleaker, yet has some lovely moments of dark comedy. There are some truly tense set pieces that will quench your horror thirst, a couple of gags to tickle the funny bone and a few concepts that will haunt your brain for a long time afterwards. Superb.

The Girl With All The Gifts opened in UK cinemas on September 23rd.