“So, I hear you’re taking a gap year?” “Yeah I am. I’m sort of hoping it’ll turn into a gap life actually…”

Kids In Love is a great example of a well-made low-budget British movie. Following the traditional and well-worn path of a coming of age story it manages to bring new life to a familiar narrative. Although not ground-breaking it’s the perfect end-of-summer watch, musing on the great transitions that are forced upon us when we are 18 along with how first love can be dizzying, all-consuming and even life- altering.

Jack (Poulter) is 18. His A-Levels have only just finished and summer has only just started but already his life plan is laid out for him. Or, more accurately, has been laid out for him by his parents. Bristol University to read History, then a law conversion degree and then life as a lawyer. He’s managed to persuade his parents to let him have a gap year, during which he’ll go travelling with childhood friend Tom (Blackley). He’s not sure he wants to take either of these paths which is just when he meets Evelyn (Jodorowsky) who introduces him to London’s secret bohemia. She brings new possibilities into his life. If only her boyfriend Milo (De Souza) appreciated her as much as Jack does…

There are two reasons that this film shines slightly brighter than other simillar cinematic offerings. Location is one factor. From the opening sequence, a montage some of London’s most iconic images from Southbank to Notting Hill, the location is one of the hearts (like The Doctor it has two hearts!) of the movie. London is a factor in nearly everything that occurs – the people, the choices and the vast unknown. And, considering that Notting Hill Carnival took place the weekend just gone, their antics (filmed at the 2014 Carnival) are rather timely. The group Jack finds himself first drawn to then pulled into is the kind of group that could only really belong in London with outcasts, for a mixture of reasons, being drawn to the city and each other. They belong to a part of London than Jack has never known and it’s a London that may just provide him with that missing part of his life.

It’s Poulter’s performance as Jack that is the second heart (yep, I’m sticking with this analogy) of the film. Poulter has fast become a stalwart presence in front of the screen, providing performances with depth and charisma, and his performance here is no exception. Considering Jack’s perspective that he is the outsider looking in on a group who are so alive it is his character that is the most developed and believable. His performance is at once carefree and yet heart-felt and with great depth. There are many sequences within the film where this is clearly demonstrated but the one that standouts is when he is making tea. Jack is making tea and his heart is breaking – after getting comfortable he has been rejected. It’s a moment that is only seconds long but it is a moment that solidifies the talent and potential of Mr Will Poulter. 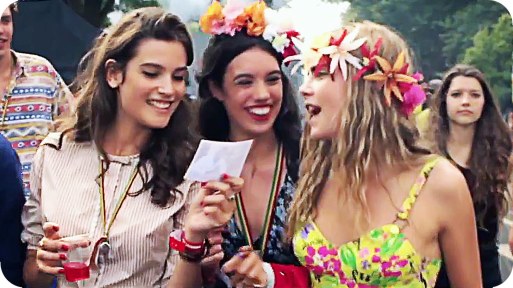 There’s much to recommend about this film: the solid performances of the entire cast and the great performance from Poulter: the beautiful locations; the short but sweet running time; the age-old tale of first love and self-discovery.

Kids In Love is in selected UK cinemas and video on demand now.