I think I’ve only given five stars twice this year. This will now be the third as ‘Julieta‘ is unquestionably a five star movie. The entire film has an air of intrigue which smothers the viewer and draws them into a grief-tainted realm of love and loss. There’s much brooding meditation on universal themes such as fate and guilt – how yearning and regret can torture generations.

Julieta (Suárez) is about to move away from Madrid to Portugal with Lorenzo (Grandinetti). When she goes on her final errands she has a chance encounter with Beatriz (Jenner) who was the childhood best friend of Julieta’s daughter Antia. Beatriz tells Julieta about how she had bumped into Antia the week prior, about how well she was looking and how she meet Antia’s children. It’s a casual encounter and yet it forces Julieta to face her past. She tells Lorenzo that she will not be moving to Portugal with him but she doesn’t tell him the reason – that she needs to confront the events that led up to the decades-long estrangement of her and her daughter.

One of the film’s great successes it how it instantaneously hooks the viewer in whilst revelling very little. We can observe much about Julieta and her relationship with Lorenzo – we see how happy and doubt free she appears to be about the move- and how this shifts entirely by to what would appear to bystanders as smalltalk-laden chance encounter. We witness how her moving forward with her life is swiftly halted as she is ejected back into her past. Not only is she inevitably forced back to the past mentally and emotionally, she then returns to living in the apartment block she lived in with Antia in the hope of manifesting ghosts of her past into present figures. The letter she then begins to write to Antia serves as the frame of the story, the letter starts at the beginning and we are then placed their – in the 1980s with a twenty-something Julieta played by a different actress (Ugarte).

What follows could then be categorised as a lengthy flashback and yet it doesn’t quite fit nor feel like that. Assigning that label makes it sound like a laborious or arduous watch – it wholeheartedly isn’t.  We, the viewer, live the memories just as Julieta is reliving them. We follow Julieta as she meets Antia’s father Xoan (Grao), her relationship with him, Antia’s birth and the seemingly fated separation that occurs with both of them. Julieta is a specialist in Classics and an air of Greek mythology lingers over the events – a prevailing sense of tragedy and predestiny, decision and consequence, fate and regret. 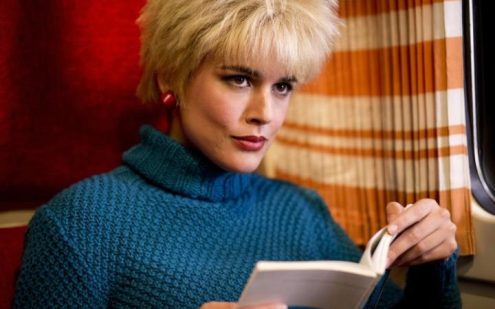 As we face in our own lives some of the events in Julieta’s life come as a quick and devastating surprise whilst others are drawn out, almost suffocating in their inevitability. Both Ugarte and Suárez are truly excellent in their joint role – each providing so much depth to Julita, each equally and superbly moving as they endure unresolved personal heartbreak. This, of course, would not be possible were it not for the master behind the camera.  Almodóvar reminds us, were it needed, that he is one of cinema’s greatest living directors. He tells the story in a way that is both fractured yet whole- just like Julieta – muted yet melodramatic. Many moments within the film are gasp-inducing in their blend of beauty and tragedy, but none more so than the switch from younger to older Julieta. It’s a tradition that is the epitome of seamless yet utterly shattering.

Extraordinarily stylish on the eye, food for your soul, heartbreaking yet heart-mending. Extraordinary.

Julieta is in UK cinemas now.