Ever wondered what it would look like if the director to The Hangover trilogy had directed Lord of War? It would look just like this – which isn’t unsurprising considering War Dogs is directed by Todd Phillips who also directed Hangover, Old School, Due Date, Starsky & Hutch and Road Trip.   Put that menagerie of film’s together and you know exactly what you’re getting into with War Dogs. There’s drugs, guns and a plot which you will have seen 1,000 times in superior movies.

David Packouz (Teller) is 22 years-old and lost. Admittedly he’s got a girlfriend he loves, Iz (de Armas), but he’s also got a grotty apartment and a low-paying job as a masseuse. At a funeral of a school friend David sees childhood best friend Efraim (Hill) and barely recognises the man he sees. Efraim carries himself with confidence, dripping with money and taking no BS from anyone – all of the traits David envies. When Iz announces that she’s pregnant Efraim offers David a way to support his young family – join his work as an international arms dealer and help exploit the US government.  Small stakes quickly become big stakes, as the rewards increase so do the risks along with the shadiness of the people they have to deal with… 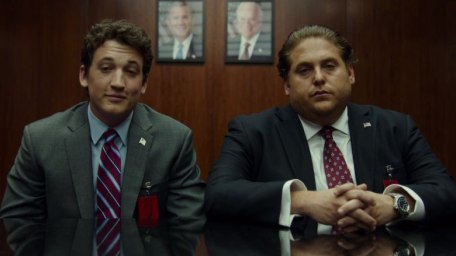 There are few things more divisive in cinema than voiceover narration. Done well it can add a depth and tone to the film, answering questions from the viewer or making them ask more. Done poorly and it can grate, it can become so needless it detracts and your detachment of the speaker can only increase with each utterance. The latter possibility is the most relevant here. The film opens with direct address – of David outlining who he is along with a meta quip about how he could provide us with context – and instantly your heart sinks a little as you think of all the other films that have used this technique and how you probably enjoyed those films more than you’ll enjoy this one.

Then after a while, more precisely once Hill as Efraim as introduced, the film picks up – it becomes more scathing of the world we are being immersed in, entering into satirical territory when a joke about pot happens. Or a joke about sex. Then the tone gets darker again then more frat boy humour derails things. But it’s not done so in a way that is humorous twists and turns, of darkness and light.  Instead it’s a bit like riding in a car along a road that keeps getting stopped by traffic lights. It cruises along and a great pace then *bam* tone change. It’s aggravating not because it’s appalling or shocking but because it’s trying to hard to be one of those things. It wants to outrage you – be that at the flaws in the US military or at the audacity of these two idiots being given to much responsibility – but this fiction is only mildly entertaining as opposed to anything else.

It really doesn’t help that our lead duo are supremely unlikable. By sheer coincidence today I read the article currently (and rightly) brewing up a storm on the web, written by Dan Bacon entitled ‘How to Talk to a Woman Who is Wearing Headphones’. Soon after first meeting David and Efraim you cannot help but conclude that they would follow Mr Bacon’s advice or write simillar. They are arsehats, repulsive through and through, and only add to the sense of hedonistic celebration that overwhelms the film. These are men who either start or finish every sentence with ‘bro’ or ‘boy’. They are dislikeable, pathetic with no redeeming qualities.

This is fine for Hill as his character is intended to meet this description.  A sociopath in a designer suit with the talk of the salesman Hill provides a winning performance – full of bite and foaming at the mouth. This is less fine for Teller who is supposed to serve as our dubious moral compass but instead provides another Miles Teller as Miles Teller role – slick, shallow and overshadowed by a castmates superior performance. Bradley Cooper is fantastic in his cameo however.

It has some good moments and just about six laughs but it’s nowhere near as strange as reality. Too light to be dark or even memorable.