“It’s a monumental farce isn’t it. Looking for nonexistent jobs and all it does it humiliate me.”

The most powerful aspect of cinema is that not only can it suit every mood it can fulfill many different functions. It can engage, entertain and expose. It can also fill a need. Ken Loach has filled a need with this film. As a society we need this film. We need to watch this film and do something about the bureaucracy that is endangering and ending people’s lives. They need us to see it.

Daniel Blake (Johns) had a massive heart attack whilst at work. He’s been off work for weeks and his doctor’s are insistent that he is still not fit for work which means he’s in need to state welfare. But getting the help he is entitled to is far from easy – it involves endless assessments, meetings and form-filling. Single mother Katie (Squires) is in a simillar need herself – she was so in need of housing that she left London and everything they knew so they could finally escape the homeless shelter they had lived in for two years. Both soon realise that negotiating the red-tape of bureaucracy is an impossible challenge.

It’s hard to phrase just how truly heart-wrenching this film is. By its finish I felt utterly devastated and dumbfounded at the farce-like awfulness that must be the cruel reality for many. I then stomped around Brighton town centre like some sort of social-warrior, embittered and empowered by what I had just seen. Countless headlines of certain newspapers (I feel no need to name or shame here – we all know to which ‘reputable’ establishments I refer to) that constantly flaunt headlines about benefits ‘scroungers’.

I do not question the fact there are some people who abuse the system. What I do question is the nature of the system, and the current tightenings that seem to occur daily, that is letting people fall through the gap. These people, as represented by Daniel and Katie, need the help. Help is seemingly available and yet the path to this help is not a path at all. It’s a hellish exercise in patience and waiting – not being able to speak to an actual human being (literally and metaphorically) and filling in paperwork in a multitude of formats without help and delayed response. The relatively minor character of Sheila (Percy) epitomises this. I’ve seen many powerful films this year and I’ve spent some cinematic time with a far few villains. The swift deep hatred I felt for Sheila will rank highly – her manner and tone seemed to aggravate me on a truly innate level. I had to remind myself that she was only an actress to try and lower my rage levels. 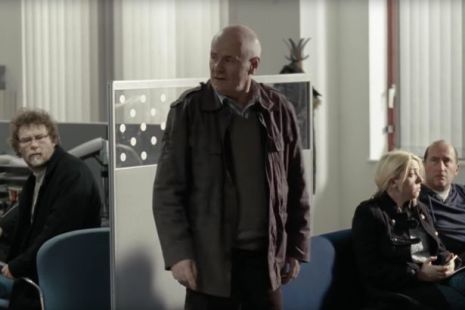 Thanks to the script and direction this would be a powerful story on it own. It’s thanks to the performances that it is so memorable and moving. Dave Johns is so likeable as Daniel, a man who would do anything for anyone yet is being utterly demoralised by his desperate and ignored pleas for help. Hayley Squires is also phenomenal as she finds herself being emotionally and mentally destroyed with each pitfall the administration puts in her way. There’s a simple message here that needs to be remembered – we are all just one or two steps away from the position the characters find themselves in. Those who find themselves trapped in the labyrinthian trappings of bureaucracy deserve our help not our disdain. We all have the choice to be the person who ignores Daniel as he makes his peaceful protest or the person who joins him.

The film is blunt, honest and shrewd – emphatic with its focus and Dickensian with its critique. Forgot ‘must-watch, this is ‘need-watch’.

I, Daniel Blake opens in UK cinemas on October 21st.