Sometimes I (very rarely!) might not want to go the cinema (gasp! shock! horror) but I still want to watch a movie, of course. Thankfully we live in the era where so many films, so so many, are available at the speed of a click. But with so much choice out there – how do we know if we want to commit to that film? What if we met (I mean find…) a better film, there’s so much choice out there? Are we sure we want to waste our precious time on that film? How do we know that is the right film for us? Hopefully this list will be of some use – a list of little known gems on Amazon Prime Video that I would give the Charlotte Sometimes seal of approval to. I promise to keep it updated!

Animal Kingdom – When his mother dies of an overdose J (James Frecheville) is taken in by his extended family. This branch of his family are the Codys, an infamous Melbourne crime family which is led by his scheming matriarch of a grandmother (Jacki Weaver). They soon begin to indoctrinate J into their criminal way of life but Leckie (Guy Pearce), one of the few cops not to have been corrupted by the Codys, is determined to help him.

Hell Or High Water – Toby ( ChrisPine) is in need of his brother’s help. Texas Midland Bank is calling in all the debt on their desolate family ranch and foreclosure appears inevitable – something Toby is desperate to avoid as he wants to pass on the land to his two sons. His brother Tanner (Ben Foster) has just been released from a ten-year prison sentence and helps him concoct a scheme to steal from the banks that are trying to take everything from them. After the first robbery Texas Rangers Marcus (Jeff Bridges) and Alberto (Gil Birmingham) are sent to catch the unknown bank robbers.  The boys continue their desperate scheme unaware of the ranchers on their trail and the showdown that seems inevitable. (Click here to read my original review)

Toni Erdmann – Winifred Conradi (Simonischek) in a short space of time has become a music teacher without a student and a dog owner without a dog. When briefly reunited with his daughter Ines (Hüller) he quickly becomes concerned about her, the amount she works and how unhappy she seems. A spontaneous visit doesn’t really work out for either of them so he leaves then renters as Toni – a life coach with a dodgy black wig and dodgy bad teeth. How he impacts her life through a series of exchanges that bounce around the awkward scale (some scenes you can watch easily, some through your fingers and some as your fingers & toes curl up in ultimate cringe) is far from conventional. Don’t expect him to wave a magic wand in a fairy godmother manner and fix things – this film is far too clever for that kind of fairytale. The things that happen are believable, heartfelt and told with a lot of truth. (Click here to read my original review)

Adult Life Skills – Anna (Jodie Whittaker) is one week away from her thirtieth birthday. She works at a nature resort in a middle-of-nowhere part of Northern England, lives in the shed at the end of her mum’s garden and enjoys making films featuring her thumbs with smiley faces on them talking about nihilism. Due to the relatively recent death of her twin brother (Edward Hogg) she can’t face talking about her birthday, yet it seems everyone from mum Marion (Lorraine Ashbourne) and Grandma Jean (Eileen Davies) to her best friend Fiona (Rachael Deering) and Fiona’s sister Alice (Alice Lowe) to the boy who used to annoy her at school Brendan (Brett Goldstein) want to talk about both her birthday and where her life is going. (Click here to read my original review)

Captain Fantastic – Ben (Viggo Mortensen) and Leslie (Trin Miller) have lived off the grid for most of their eldest child, 18 year-old Bo’s (George MacKay) life. It’s the only life he and his five siblings have ever known – they are versed in six languages and are fiercely intelligent yet know little about the world outside their home. When Leslie dies far away from home Ben and his brood decide to travel to her funeral, even though he is fully aware of the cold reception he will receive from Leslie’s bereaved parents and his sister’s family. A series of events along the way will force Ben to question whether he is enabling or endangering his beloved children. (Click here to read my original review) 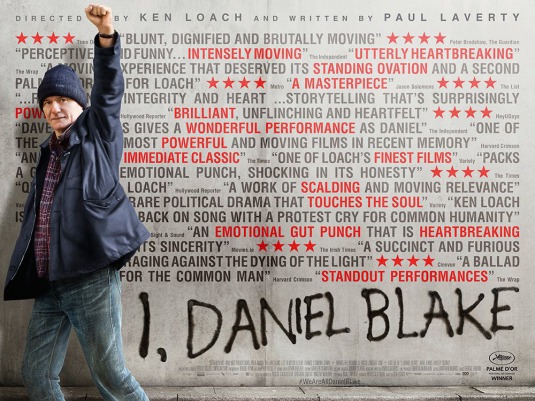 I, Daniel Blake – Daniel Blake (Dave Johns) had a massive heart attack whilst at work. He’s been off work for weeks and his doctor’s are insistent that he is still not fit for work which means he’s in need to state welfare. But getting the help he is entitled to is far from easy – it involves endless assessments, meetings and form-filling. Single mother Katie (Hayley Squires) is in a simillar need herself – she was so in need of housing that she left London and everything they knew so they could finally escape the homeless shelter they had lived in for two years. Both soon realise that negotiating the red-tape of bureaucracy is an impossible challenge. (Click here to read my original review)

Paterson – Following a-week-in-the-life narrative we join Paterson (Driver) as he goes about the routines of his life. He works as a bus driver in Paterson, New Jersey – driving his daily route, listening to snippets of passenger conversation, walking to/from work, walking his dog and then stopping his local bar for his one beer. In contrast his wife Laura (Farahani) is ever changing, adopting new ambitions and projects with each day. It’s a normal life and that’s where the poetry is found, within the smallest details. It’s in the incidental moments where life can be won or lost; where no day – no matter how hard we may try – is the same as the next. Time stops for no man (or woman) so we must embrace life for all its minor eccentricities and observe the profound within the apparent mundane. (Click here to read my original review)

Supersonic – A documentary which follows Oasis from the very beginning and ending at their iconic 1996 gig in Knebworth. Told through a mix of archive footage, audio of recently  recorded interviews and some animated reconstructions this isn’t just one for the fans. A rags and riches storyline told with frank honesty by those involved and with some cracking tunes to accompany it. (Click here to read my original review)

Marguerite – Lucien Beaumont (Sylvain Dieuaide), an infamous newspaper critic, has gatecrashed a party escorted by his Dadaist artist friend Kyrill Von Priest (Aubert Fenoy). His attention is immediately taken by aspiring singer Hazel (Christa Théret) who performs as warm-up to the host. Baroness Marguerite (Catherine Frot) sweeps into the reception room in her large manor home, her room filled with guests for her charity recital. France’s finest and mightest, who all belong to the exclusive Amadeus club which she is a part of, are all there to see her. Upon reaching the stage which is filled with her orchestra she turns to face them, her eyes sparkling with sheer and utter joy, her face is set and ready for that first note. Her mouth widens, forming that first note. What comes out of her mouth is unlike anything Lucien has heard before – it’s awful. Marguerite is not singing, she’s screeching, her voice is the embodiment of  nails on a chalkboard or a cat screaming.  Kyrill believes he has found modernist art  and Hazel tries to hide her embarrassment from the poor woman. Finally Marguerite stops and her audience erupt into applause and admiration, flowers are thrust upon her and her talent is heralded. Lucien is bemused – she clearly does not know as her small aristocratic society has not told her – and feels compelled to write a review which is ladden in euphemism and  backhanded sentiment. Marguerite does not read into it and is filled with joy at having her talent recognised. Events start to spiral, with a public concert planned. How will Marguerite cope when she discovers the truth? (Click here to read my original review)

Magic Mike XXL – Magic Mike ended with Mike throwing in the thong and retiring, giving up the ‘glamour’  of the industry to fulfill his dream of setting up his own carpentry company. He also gave up all the perks of the job (money, drugs and lots of women) to settle down with one girl. The sequel starts three years into his retirement, his business is going as well as could be expected in this economic climate, yet Mike’s life is not particularly…well magical. So when he gets a phone call from his old crew, offering him the chance for ‘one last ride’ and reunite for a final performance at a stripping convention. (Click here to read my original review)